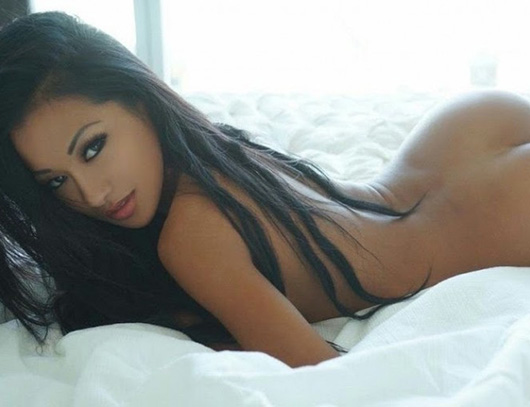 Cam4 is one of those adult sites that do not have a specific niche in mind and are ready to cater to users who love a little bit of everything. Here, one can find female, male, trans, and group models. Even though it does not exactly fall into popular, mainstream live cam category, the platform does have a couple of perks to offer.

For starters, it does not even require a login and registration to sneak a peek at what’s happening on the site. Next, it’s not so strict about verifying user info. Finally, it does allow users to interact with models without paying real cash for that. Still, paid memberships do exist on Cam4, and they can make site experience even more rewarding. So, let’s take a better look at the site functionality, prices, and models. Who knows? It could be one of those cam websites you’ll come to visit often. 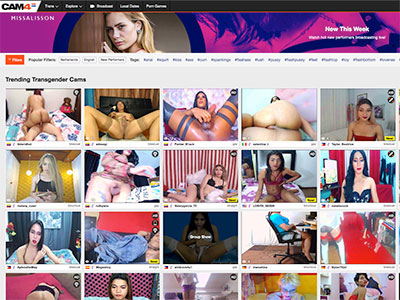 The interface is neat and simplistic and does not seem like much at first. Users get a chance to enter any cam room they like — pretty much like on other websites. Here, a nice perk is that you can also press a thumbnail and rewind to see what’s been going on in the room a few minutes ago.

The biggest downside anyone can plainly see is that the video window is a bit too small, and the chat window is just too big. It kind of looks like the developers accidentally switched those two places because no one comes to a cam site to read or write lengthy messages. They come there to watch, but the videos have trouble going full screen — at least, for free members. Then again, to be fair, image quality and sound are pretty good, and the videos do load fast — even despite the small window.

Another pretty unique feature is that model profiles do not have avatars but show screens from their latest (or currently broadcasting) videos instead. This all is pretty refreshing and gives you the sense you’ve come to experience — the real-time thing. As for the rest, site menu and functionality remain pretty standard, so anyone will easily wrap their heads about using the service — no tech skills required.

The footer menu has easily accessible buttons that allow users to purchase tokens. These tokens can be later on be used on tipping the models and having them do what you want them to do. But we’ll describe that in more detail in the following section.

How Does Cam4 Work?

Just like pretty much any other service, Cam4 is a system based on tipping the models. Without the tokens, you will not get far or see anything interest-worthy. Most of the time, a free session implies a model just sitting there and looking cute — maybe, do a bit of fiddling in the process, but nothing too special.

Users can also request and start a private chat with any of the models, but — once again — for tokens only. For paying premium members, it’s possible to go full-screen or start multiple chats sessions at a time, but for any real action, users are expected to pay. 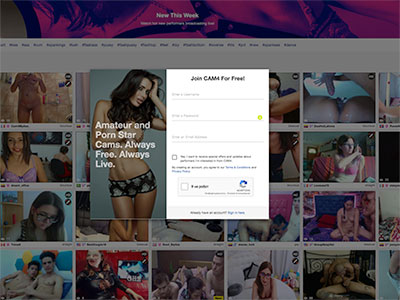 The registration is incredibly simple and takes only a couple of minutes. There is no social media login option, and everything is done manually, but since the number of required steps is not too much, the whole process does not seem to take a lot of time. New users are required to fill in their nickname, create a pass, and include their valid email address. After verifying the email, users can enjoy the basic functionality of registered, non-paying members.

In practice, however, the only real benefit of being a registered free user is that you can start chatting with the models. Without the tokens, it barely does anyone any good, but it’s still an option. Non-registered users can only watch, without even attempting to chat with the models.

One more thing worth mentioning is that Cam4 does not seem to want any proof of your ID or legal age. It looks like just anyone can join the site, turn the camera on, and start performing. Perhaps, this is one of the reasons why this site gets relatively little exposure — the legal side of things.

Cam4 seems to be either secretive about their member stats; or, they do not keep track of those at all. Given the simplified registration procedure, the latter seems more likely. Still, it does not look like Cam4 is missing on users because there seems to be over a hundred active cam streams anytime you log in the service.

Most of the models are women, and most of the watchers are men — not unlike on any other live cam service. Still, what surprises most about Cam4 is their user diversity. Given from the stats the site shows you about currently performing models, users can also find men, she-males, and trans models on Cam4. But even this is not the end — the models vary a lot by age, body type, sexual preferences, etc. As already mentioned, this site offers a bit of everything to everyone interested in watching.

The geolocations are as diverse and the members themselves. The site claims to have users from over fifty countries, but there seems to be no favorite or dominant location. One thing is for sure, though — this site does seem to have more male models than most other platforms.

Users can add information about their body type, appearance, location, and languages spoken. There is a total of ten filters letting you refine your search parameters, and it’s more than possible to fine-tune your search results. Users can also add short bios to their profiles, but in most cases, this graph remains unfilled. All in all, the fact that few profiles on Cam4 are detailed is not surprising — this is not a match-making site, after all.

Adding the languages spoken is probably one of the most useful features of Cam4 profiles. So, if you’re interested in a model that speaks English, you will be shown profiles that actually meet this requirement. If you pay attention to the location flag, it will not necessarily be the US or British one. But, the model will still have some basic English skills. 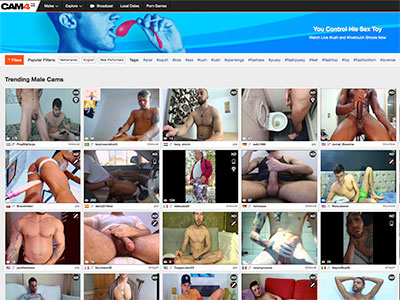 Apart from age, location, and sexual preferences, you will not see (or even have a chance to add) a lot of personal information. The site does allow uploading plenty of pics and videos to user accounts, and it’s always possible to define specific privacy parameters. For example, videos you add to the gallery may be either private, public, or visible to friends only. And yes — there is an option of making someone a connection of Cam4, which is kind of funny if you think of it.

How much are Cam4 tokens?

Tokens used for tipping and paying the models are available in batches from 50 to 500 credits per batch. The prices will vary depending on the batch you buy, from $0.199 per credit (the minimal amount ) to $0.169 per token (the maximum, 500 batch). Those prices are valid customers who pay with their credit cards. If you want to pay with PayPal, the amount will be slightly higher — from $0.2212 to $0.1888 per token.

Speaking in terms of actual cash, not in virtual tokens, a private chat may cost you somewhere between $2.4 and $24 per minute, so the five-minute private show may end up costing up to $120. Spy Shows with no interaction are cheaper, ranging from $1.2 to $2.4 per minute, and the group shows are the most affordable of all (for a fixed price of $1 per minute).

Cam4 also offers a monthly subscription at $19.99, which drops down to $9.99 if you subscribe for a full year. All subscriptions are complemented with additional tokens, but they also renew automatically. So, unless you’re willing to go into trouble with refunds, make sure to cancel those you no longer need in time.

The only difference between paying with tokens and getting a full-scale subscription is that the latter one gives access to spy shows and group shows. Private chats still have to be paid for with tokens, and any tipping you want to do also requires these virtual credits.

Now, let’s take a closer look at the features available to premium members. Cam4 has only one subscription type (Gold), and only subscribed members can watch several streams at once. Also, Gold members do have a chance to access some group and recorded streams for free, but that’s pretty much it — the rest is based on a per-credit system mostly.

While we did mention average prices on private sessions, the actual cost will have to be agreed on with the model. Gold members can contact any performers without spending the credits, which is quite beneficial if you enjoy private shows. Still, you will not be able to do much without the tokens, so it’s always a combination of fixed-price subscription and per-service tokens that ensures the best user experience with Cam4. 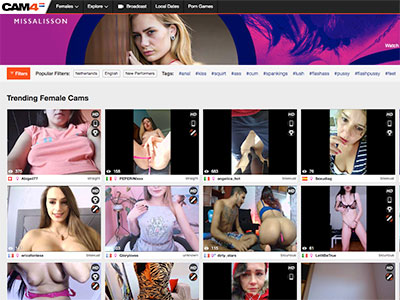 As already mentioned, video screens on Cam4 are really small, and only premium members can go full-screen. And, even then, the functionality is a bit glitchy. Still, image and audio quality are ok at any time, so if your connection is stable, the stream should not disappoint you. As to how much exactly you’re going to see, that depends on how much exactly you’re willing to spend. On the whole, most models seem to be well-equipped with different sex toys and are determined to please customers who are ready to pay for the show.

Private shows can also be pretty engaging, and there is always a chance to go fully private, without any other users spying on your stream. This, however, will cost you — just like pretty much any other good performance on Cam4. On the other hand, if you’re not willing to pay, webcam sites are probably not the best spot for you. If you do, Cam4 should not disappoint in terms of equipment and model experience.

On the whole, Cam4 is a legit service, but not exactly an outstanding one. We would have to give it a solid three out of five (well, maybe a 3.5), but the truth is — you can find plenty of other platforms that offer the same functionality for a lower price. Perhaps, one of the biggest perks this site offers is the absence of registration for those who just want to preview the goods. But, even this is not exactly a revolutionary benefit because there are plenty of other sites where you can watch without interacting. And, you will most likely see more than you would on Cam4 that requires tokens to really get the action going.

Another thing that kind of makes this website special is the simple fact that they do seem to have more male models than most other platforms. This could be a huge benefit for certain audiences, so if you’re tired of the unevenly skewed male-female ratio on most cam sites, this could be a nice service for you. If not, you might think of spending your money elsewhere because Cam4 does not really bring anything special to the table.